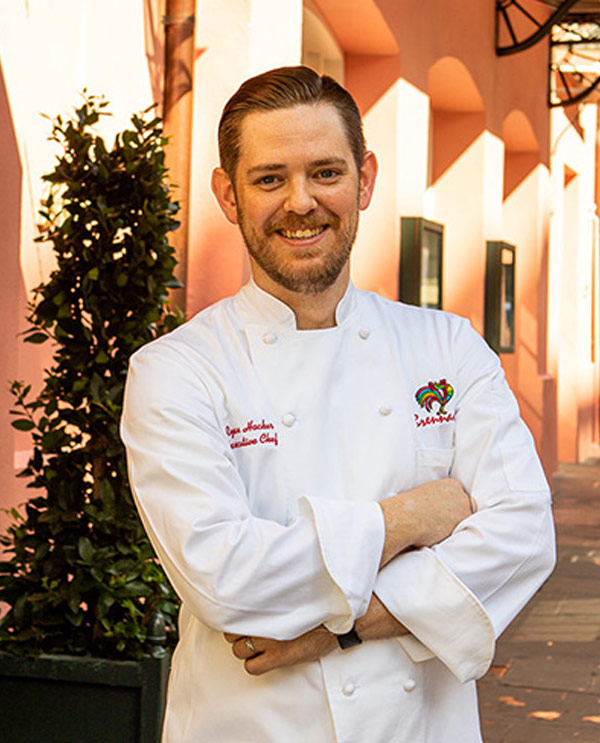 Ryan Hacker, a valued member of the re-opening team at the renovated Brennan's, wears the top toque as Executive Chef of the distinguished New Orleans Restaurant. Born in Texas and bred on recipes from both grandmother's well-loved Paul Prudhomme cookbooks, Ryan's road to Brennan's has been well-paved with milestone opportunities that have seasoned and prepared him for the challenge of leading one of New Orleans most beloved kitchens.

Several years spent working in restaurants and studying business at Texas Tech University preceded Hacker's matriculation from New England Culinary Institute during which a six-month internship at the acclaimed Hamersley's Bistro in Boston, MA ignited his passion for fine dining, sprouting from a youth spent watching family grow, can and preserve vegetables from their one acre summer garden in rural Texas. By immersing himself in Chef Gordon Hamersley's approachable food, smart sourcing, and kitchen built around teaching – Ryan received the equivalent of a graduate education.

Ryan returned south to work for heralded chef Kent Rathbun in Dallas, Texas, where he learned the valuable lesson that every dish tells a story and presents a sense of time and place. The crusade to work with chefs with diverse backgrounds on top of their field brought Hacker next to the kitchen of Andrew Weissman at Osteria Il Sogno. Ryan credits Weissman as the most influential chef in nurturing his career and cooking style - a clean, aesthetically pleasing approach to the plate, coaxing individual ingredients to present as collaborative flavors.

New Orleans was the last place Ryan thought he would land but the opportunity offered by lauded chef Slade Rushing on Brennan's re-opening team was a challenge Hacker could not refuse. That both chefs grew up in extremely rural towns, Hacker in Tyler, TX and Rushing in Tylertown, MS, hunting as a shared favorite past time, and mutual excitement for modernizing classics poised the two chefs to be good partners in the kitchen for the five years they worked together during which the restaurant earned "Top 10 Best Restaurant" honors from The Times Picayune/nola.com and Southern Living, five James Beard Foundation Finalist Award nominations, and many other notable accolades.

Today Ryan leads an esteemed group of experienced chefs at Brennan's, revering tradition and determined to maintain the authenticity of the classics, while integrating a creative and innovative approach to the menu. "Ryan Hacker is a leader in the kitchen. His cuisine is imaginative, ingredient based, and builds on the tastes and flavors of the local culture," says Ralph Brennan.

Among Ryan's most lauded contributions to Brennan's menus is an inventive rendition of one of New Orleans' most famous dishes, Blackened Redfish [a flashback to his childhood,] that is now poached in butter with spices cooked separately. After delicately preparing the spice mixture, the entire fish is coated with it and the taste maintains its pronounced flavor. Hacker's modern interpretation of Quenelles, a classic French favorite in the city since the 1800s, features Shrimp Quenelles with New Orleans Style BBQ Sauce, Candied Lemon, and Rosemary Dusted Crostini.

"We aren't so much looking to reinvent the wheel when it comes to traditional dishes and Creole cuisine, but rather change its tires, refresh it, and offer a refined version that pleases our local diners beholden to a rich New Orleans heritage, as well as its next-generation," says Hacker.

Named “Restaurant of the Year”