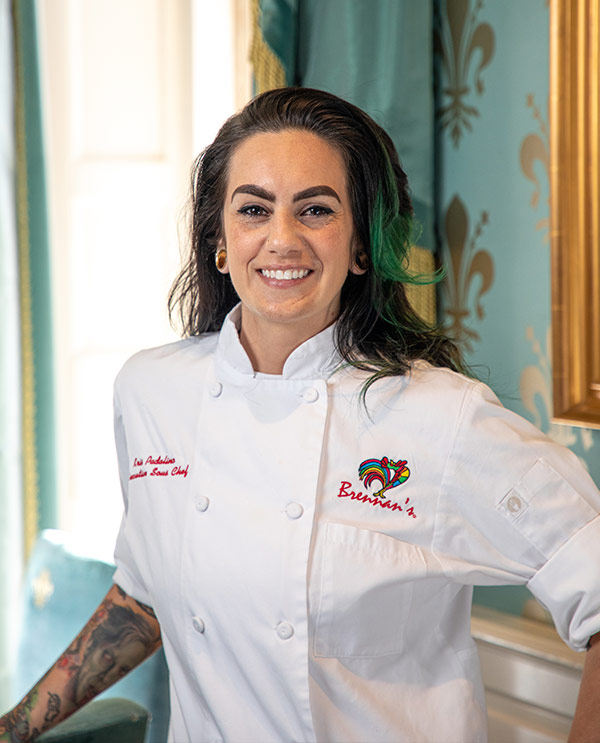 Miami native Kris Padalino has a degree in chemistry and mathematics – so when her passion impelled her to leap from a laboratory to culinary school, the exacting and technical field of pastry was the natural route to choose. She received a diploma from Le Cordon Bleu in Pasadena, California in 2009, and dove headlong into a career at such notable establishments as Campanile in West Hollywood and Michael’s in Santa Monica. Moving to Denver, her scientific background came back in to play in a big way, as she was forced to adjust all her recipes to the altitude – starting at the beginning: re-learning to boil a perfect egg. After a year as Executive Pastry Chef/Director of Operations for the Kevin Taylor Restaurant Group, she went on to make a name for herself at Bittersweet, and then as Executive Chef at Glaze. A single visit to New Orleans was all it took to convince her to relocate, and a stage at Brennan’s told her that was where she wanted to work. Despite her Florida roots, Padalino didn’t have much background in Southern cooking, and has taken to it with her characteristic drive. And, just as Brennan’s presents New Orleans’ great classics with an elevated contemporary sensibility, Padalino’s natural creativity brings a delightful twist to the dessert menu, often in the form of unexpected – even savory – ingredients. Her Charlotte Royale is made not with berries, but with peaches; that intriguing flavor in her Citrus Tart? Tomatillo! She knows that Bananas Foster will always be the destination dessert at Brennan’s – but she is proud to have pried a slight portion of its 75% ‘market share’ away from the hometown favorite as guests discover her delectable new seasonal creations.

Wine Cellar honored with “Best of Award of Excellence”