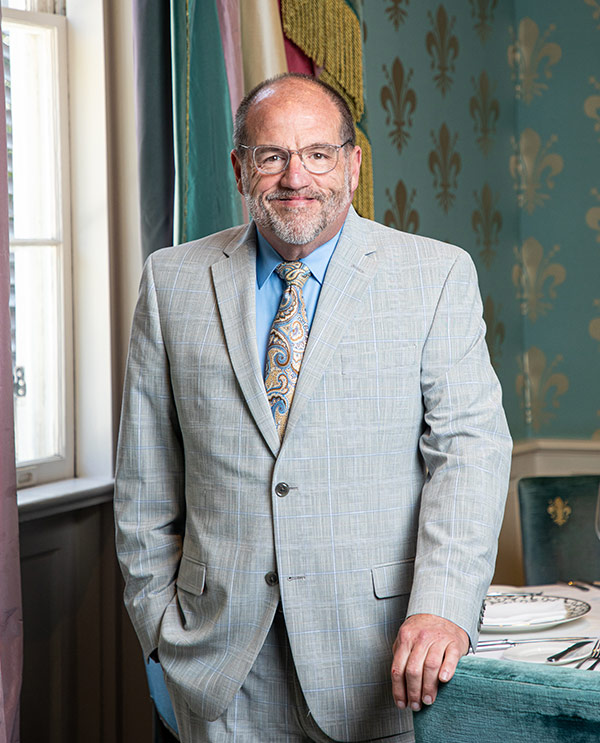 If you detect a flair for the dramatic in Paul Martin, Assistant GM at Brennan’s, that’s because he studied Drama and Communications at Loyola University; Theater at the American Academy of Dramatic Arts; and History at the University of New Orleans – a background that serves him well as he’s serving diners at the legendary Royal Street institution. “Brennan’s is such an incredible asset to New Orleans, historically and gastronomically,” he declares. “It should be on everyone’s bucket list!”

Hospitality is another trait that runs deep in the New Orleans native: at fifteen, he was inviting friends over for full-on formal dinners, delighting in his British mother’s extensive silver service “with all the forks.” Having grown up frequenting Brennan’s in the old days, he knows all about the magic he’s now helping to create for the current generation of guests. In fact, he was a waiter at Brennan’s for a short time in the 1980s, before spending much of the next decade managing Copeland’s restaurants, and the following decade-and-a half in hotel management with Marriott properties along the Gulf Coast.

When Martin moved backed to New Orleans and learned that Brennan’s was about to re-open, he applied to be a captain – and was hired as a manager. The new Brennan’s, he says, is better than ever: “The food is spectacular. So is the setting. Ralph Brennan is brilliant at running a restaurant, and he looks to the future while still upholding the restaurant’s history, which is, after all, his family history. We manage to honor both positions.”

Today, Martin can be found keeping things running smoothly throughout dinner service, and participating in ritual dramas like the weekly Champagne sabering in the courtyard (he is proud to have been inducted in to the Brotherhood of the Golden Sabre.) He is also fond of treating guests to behind-the-scenes tours of the private dining rooms on the second floor, and giving oenophiles an eyeful of the wine room. “I especially love revealing the view of Royal Street from the balcony,” he says. “I do it most every night, and I’ll never tire of seeing faces light up at such a special sight.”